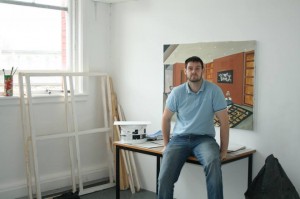 David Fox is an Irish contemporary artist, specialising in paint.

Originally from Tullamore, Co. Offaly and born in 1987, Fox has been painting since a very young age. He graduated from GMIT (Galway), with an Honours degree in Fine Art in 2011 and the University of Ulster, Belfast, with an MFA (Masters in Fine Art) in 2013

Currently, he is both living and working in Belfast, with a studio at Creative Exchange Artist Studios, in the East of the city.

Fox’s work has been exhibited throughout Ireland, including the Galway Arts Festival in 2009, Dunamaise Arts centre, Portlaoise, 2013,The Luan Gallery, Westmeath in 2015, and the Olivier Cornet Gallery, Dublin in 2016. He has exhibited at international art fairs including Positions art fair, Berlin and has had international solo exhibitions at Galeria Silvestre, in Tarragona and Madrid, Spain. After receiving a visual arts bursary from the Arts Council of Northern Ireland, Fox is now working towards a solo exhibition in September 2017 at the Aras an Chontae, Tullamore, Co.Offaly